A festival dedicated to the largest chariot on the move ! 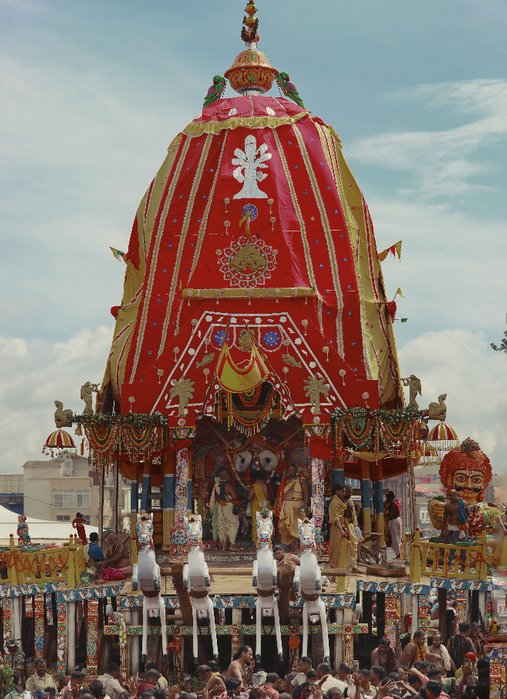 What is Rath Yatra ?

Do you know what is Rath Yatra? With three huge chariots housing each of our three deities being pulled by hundreds of devotees from one temple to another, this car festival is a treat to the eyes!

In July every year begins the 9-day sojourn of three deities Lord Jagannath, his sister Subhadra and his brother Lord Balabhadra to the Gundicha temple and back. While the onward visit is called the famous Rath Yatra, the return journey is called Bahuda Yatra. Read more on the reason behind this journey.

Significance and the Story

King Indrayumna was an ardent devotee of Lord Vishnu and wanted to build a temple in his honour. Not knowing how to go about it, he prayed to Lord Brahma to guide him on the right path. Lord Brahma appeared before him and suggested that he must seek advice and blessings from Lord Vishnu for the best solution.

After a long bout of prayers, Lord Vishnu appeared in the King’s dream and told him to get a log of neem wood from Bankamuhana. Once the king had sourced the wood from the said forest, now he faced the problem for the right person to craft the idols. Any carpenter who set to the task could reach nowhere as their instruments kept getting stuck or broken on touching the neem wood. The king was now in a quandary.

One day, as he was sitting in this forlorn state, he received a visitor by the name of Ananta Maharana. Disguised as an artist, he was none other than Lord Vishwakarma, the architect of the Gods. He offered to make the idols on condition that he won’t be disturbed till his work is complete. The king agreed.

Now Vishwakarma started his work inside a closed room with all the doors and windows closed. You could hear the sounds of work getting done from the outside. The work continued for a long time. Months passed, and people started getting curious. One day, no sounds came from inside the room. The silence continued for the next few days.

Out of curiosity, the King and his sister opened the door to the room. They saw that the idols were partially prepared with only the head and torso, and no hands and feet. On seeing the King, Vishwakarma got angry. He said that since the former has broken his vow, the work would remain incomplete. Saying this, he left. And that is how we came to have our three deities with only a head, torso and two arms each with no hands and feet.

Why is Rath Yatra so unique ?

Queen Gundicha was the sister of King Indradyumna, the one who built the Jagannath temple of Puri. According to folklore, Lord Vishwakarma had built the idols of Lord Jagannath, Maa Subhadra and Lord Balabhadra from wood logs at the Gundicha temple. Queen Gundicha was the one who had opened the doors to the room while the work on the building of idols was midway. Seeing this, Lord Vishwakarma left his work incomplete and disappeared.

It is said that after the Jagannath temple was built, the Holy Trinity would visit Gundicha temple once a year for 8 days and make the return journey on the 9th day.

Rath Yatra, the car festival of India is celebrated globally. It is a unique event that isnothing like anything you have ever seen! Three richly decorated chariots,resembling temple structures, are pulled through the streets of Puri in India. In this, Lord Jagannath rides his chariot, the Nandighosa.

As per Wikipedia, the English usage of the word juggernaut to describe anyone or anything that seems unstoppable, powerful, or dominant, originated in the mid-nineteenth century and was adapted from Sanskrit word Jagannath.

Jagannath is also described in Odia language as ‘jagata ra natha’ (Lord of the universe) belongs to each and everyone in the true sense of the word. Hence, this is one festival that is celebrated by one and all, in every part of India.

This festival is close to every Indian’s heart and is celebrated not just in Mumbai, Ahmedabad, Delhi, and Bangalore, but across global cities like London, Amsterdam, New York and others.

( Few images from past events )

To celebrate this moving icon of India, Rath Yatra Stockholm has undertaken the challenge to build the biggest rath in Scandinavia! We intend to bring this to life with the help of all of you!

The Odia Association of Sweden along with Iskcon invites every Indian and their association in Sweden to be a part of this historic construct which will roll on its maiden journey in June, 2023.

The 2023 Rath Yatra in Stockholm, planned as the biggest rath in the history of Scandinavia will include a multi-cultural fest, The India Unity celebration where we will have stalls from different states of India. We beseech all Indians to come together as one and be a part of this event with us.

Rath Yatra Stockholm is planned as a non-profit in Sweden, dedicated to promoting the chariot festival and the unique culture of Lord Jagannath. 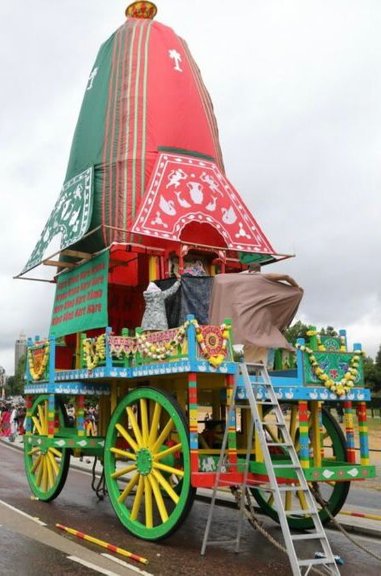 A model of proposed Rath

Setting off from the Cricket ground of Stockholm Gärdet, the Rath, pulled by ropes by hundreds of devotees, will make its way to the historic Djurgården and then return to Gärdet. 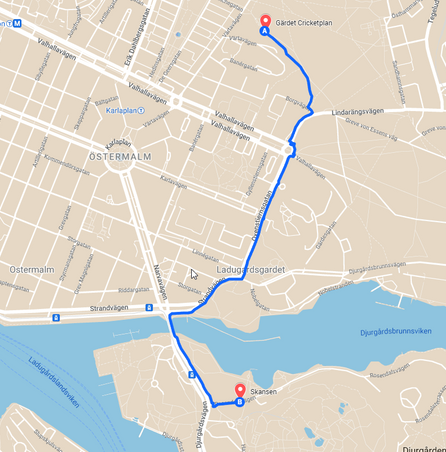 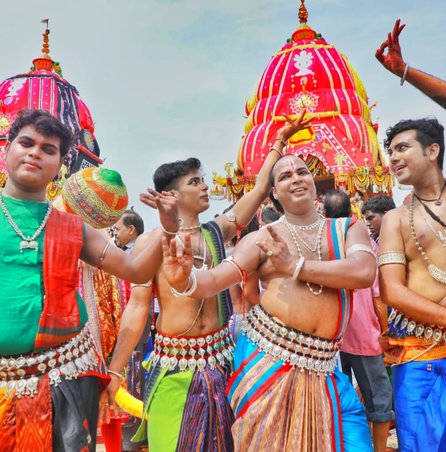 How you can help and be a part of this Journey?

Join hands with us in helping recreate a mythological story before your very eyes! We need all the help we can get. Hence we request every devotee of Lord Jagannath (an avatar of Vishnu and Krishna)  to come and participate. Help us by spreading the word among your friends and family! Learn more about how you can help. Register here.

Mesmerizing Images of the Rath Yatra and the culture surrounding it!

Have you ever witnessed the breath-taking car festival of India? No? You are in for a treat! During this you will not see a puja or celebration in a standstill place. You will see a unique spectacle which involves three huge raths being pulled by numerous devotees to the Gundicha temple! Check out the mesmerizing images from the Rath Yatra, the likes of which you must have never seen before!

Watch this space to stay up to date about the event

Thank you SSPC for your support! More Info 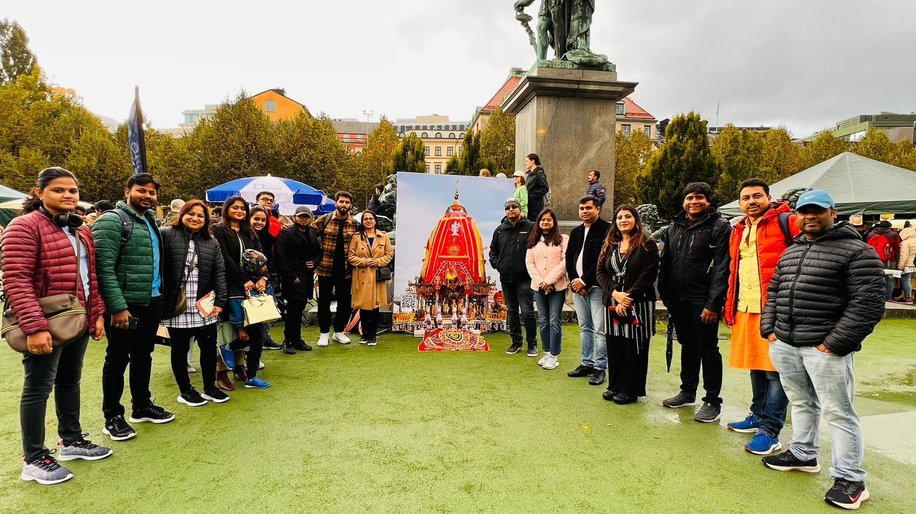 Rath Yatra Stockholm will be participating in Namaste Stockholm, the melting pot for Indian culture in Sweden.

Our standee at the venue will have a prominently displayed Rath along with culture advocates who will be explaining the prominence of Rath Yatra, its origins and how the 2023 Yatra in Stockholm will be organized.
We welcome you to connect with us! 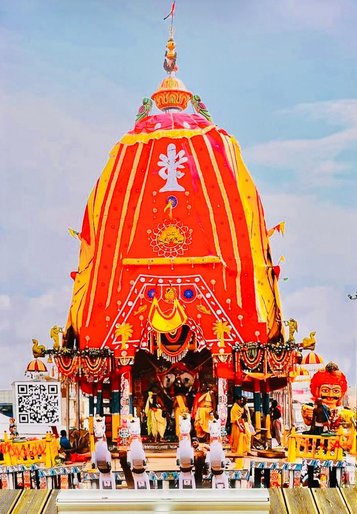 Register with us to be a part of this glorius event !

Come join us and be a part of this glorius event ! A festival which is close to the heart of every Indian ! Join hands with us in helping make a mythological story come true every year !

If you want to be a part of this iconic event, please fill-in few details mentioned below and we will get in touch with you.